This is an EXCELLENT article on why colored pool plaster turns white, reprinted with permission from onBalance August 2020.

Having a beautiful pool with a colored surface, especially one with a quartz or pebble plaster finish, is a popular choice among pool owners, and understandably so. 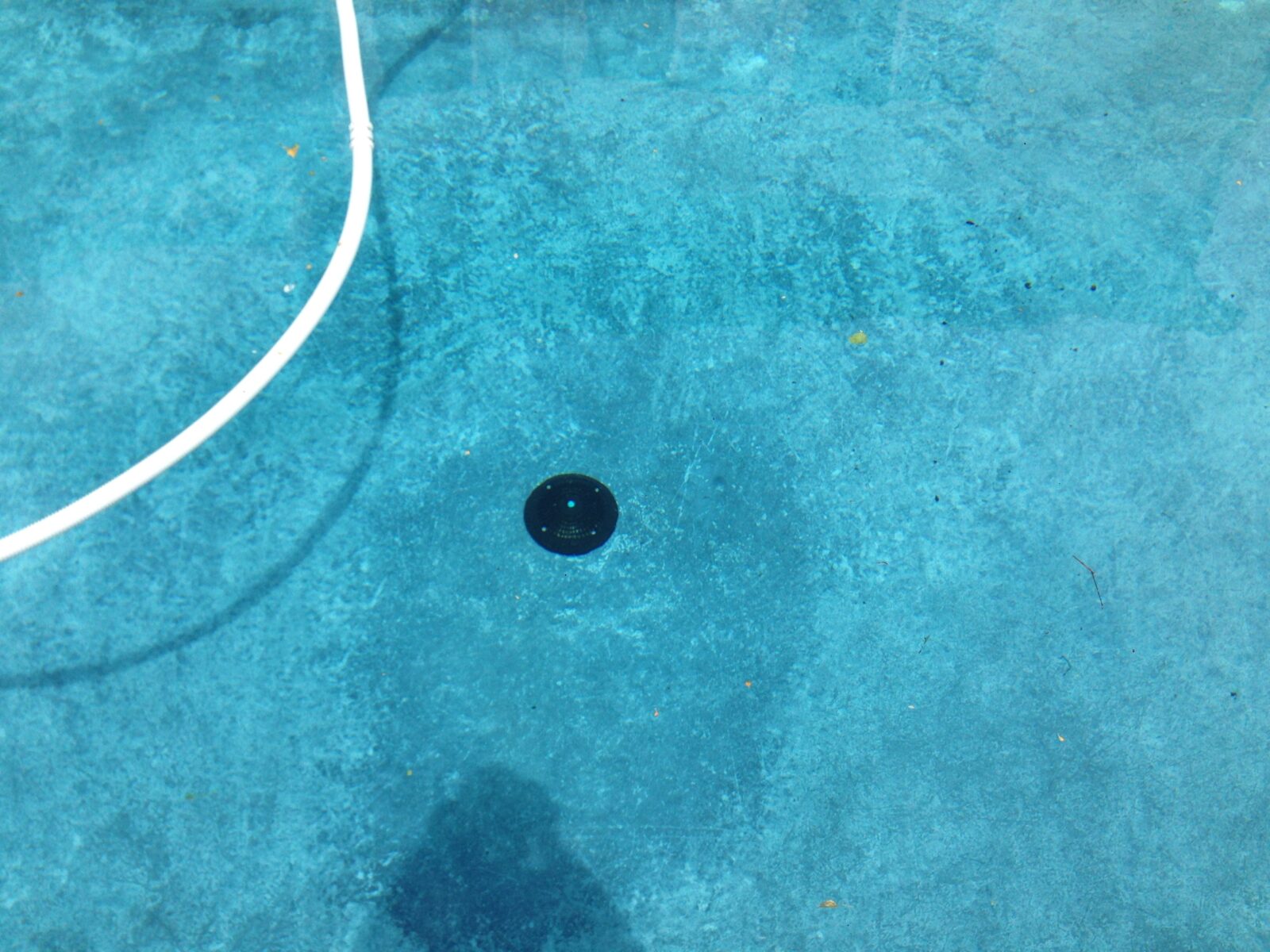 The color adds ambiance to the setting and can make the water wonderfully attractive and inviting. That’s why pool owners are willing to pay extra to have that special color enhance their water and the entire backyard.

Because the interior pool surface is such a dominating visual element, it must be disappointing for everyone involved on those occasions when they watch their pigmented, colored pool become unsightly with whitish blotches, streaks, or small spots. Later on, it must also be disappointing, if not more so, to learn that the cause of the unsightly color problem was misdiagnosed, and worse, the remedial action taken to resolve that problem caused more serious damage.

Plaster colors can fade or turn whitish for a handful of preventable reasons. First off, scale can be deposited onto pigmented plaster surfaces by out-of-balance pool water. As is widely known, calcium scale makes the surface rough and turns it white, and acid washing is often the remedy.

However, it is also common to have colored plaster (including quartz and pebble) surfaces lighten in color due to mistakes in plaster workmanship and material selection. Because changes in color resulting from these defects are also a lighter or whitish color, it is easy to mistakenly believe that the problem is calcium scaling, and that the pool water has been out-of-balance. Once you make that misdiagnosis, it is then easy to mistakenly assume an acid wash is the best remedy. But when there’s no scale there to remove, that will only cause etching, it won’t fix the problem and will shorten the life of the plaster.

Here’s the workmanship issue that is both common and regrettably overlooked. The whitening of colored plaster can also be caused by soluble calcium ions in the plaster dissolving and fleeing the scene into the pool water due to poor plaster workmanship and which has nothing to do with water balance. When calcium dissolution occurs, it means the plaster surface is deteriorating, losing density, and becoming porous. Yet it usually remains smooth. And when porosity develops and increases (which can take several months), a whitening of color/pigmented plaster results.

A porous surface appears lighter in color because of the way it reflects more light than a non-porous surface. According to Dr. Boyd Clark, senior materials specialist with Construction Technology Labs, it’s the same reason that a head of foam is lighter than the beer; the foam is lighter in color because it throws off more light: “The fact that we have a spot, or a lightened area is due to the fact you have an increased porosity,” he says.

It’s helpful to note that even common white pool plaster can develop white spots and streaks that are whiter than the surrounding plaster because of increased porosity in those areas. There is a direct connection in how white and pigmented plaster develops color-shading changes.

Calcium scaling, which is caused by out-of-balance water (an overly positive LSI value), usually deposits a uniform layer of calcium carbonate throughout a pool and whitens the entire pool, including fixtures. It is generally rough to the touch. It can be easily removed by scraping or sanding with sandpaper.

On the other hand, if the whitish discoloration is smooth to the touch, manifests itself in streaks, blotches, or small spots, and if diluted acid does not quickly remove the white discoloration, then one should realize that the problem is probably not calcium carbonate scaling, but a porous surface instead that is deteriorating faster than normal.

What leads to a porous, yet smooth surface? There are two relatively soluble components of hydrated (cured) cement/plaster. They are calcium hydroxide (a by-product of the cement/water reaction) and calcium chloride (if added to the mix). Calcium carbonate, a primary plaster constituent, is insoluble. Some people falsely assume that calcium hydroxide and calcium chloride can only be dissolved by aggressive pool water (negative LSI). In fact, both elements can be dissolved by balanced water and even positive LSI water. That means something other than aggressive water is the culprit for porosity developing and a whitening effect to develop and increase over time.

When those calcium ions slowly dissolve away, that process can also remove some color pigment too. That is another reason for a whitening to develop.

Given the above, the logical thing to consider for color problems is plaster quality. The onBalance team began examining failed colored pools in 1998. Plaster samples were sent to professional cement labs to perform SEM analysis. The labs were instructed to look for aggressive water effects, but none were found. The reports have come back from the labs that implicated poor workmanship and materials as reasons for color loss and whitening. The following are plaster mistakes mentioned by the labs.

There’s no question that poor workmanship and materials can result in a gradually and increasingly porous cement/plaster surface, including excessive shrinkage cracks, which also turn noticeably white. Those defective plaster practices lead to excessive porous surfaces that allow water, whether it’s balanced or imbalanced, to penetrate and dissolve soluble plaster components from the surface. It is the increase in porosity that results in a whitening effect in those compromised areas. Aggressive water does not necessarily cause micro-porosity. When aggressive water etches a plaster surface, it creates a rough, pitted, and jagged surface (which is different from a surface of micro-porosity) and does not cause a whiteness to develop in steaks or spots.

In the cement/concrete industry, it is commonly known that producing a hard and dense cementitious surface is a major requirement to help ensure vivid and more consistent colors that last many years. A quality cement product can stand up to harsh conditions, such as aggressive water (the same as rain, which is very aggressive, on driveways or sidewalks), and not develop whiteness or color fade or loss.

When a quality plaster finish is produced with good workmanship and materials, just like concrete, it helps prevent color pigment(s) and other soluble plaster material from dissolving out of the plaster. Below are some good workmanship practices suggested by the Portland Cement Association to produce a hard, dense, and long-lasting cementitious surface.

There’s another reason for color loss: some plasterers or suppliers use organic pigments in their plaster mixes. Organic pigments can be bleached by the presence of chlorine or other oxidizers, and even by the sun. It is recognized that organic pigments are cheaper than inorganic pigments, but they generally cannot withstand a swimming pool environment for long.

This bleaching action occurs even if the plaster workmanship is of high quality. Some plaster mixes contain two pigment colors. If one is organic and becomes bleached, that color will simply disappear leaving the other non-bleachable pigment visible as the sole color.

How to Best Remedy Porous Plaster

A very extreme acid treatment is often tried to restore the original color of the plaster. However, such acid treatments also etch the plaster and make the surface rough which also leads to increased porosity and surface deterioration. That simply reduces the life span, and the pigment color may still fade away and turn whitish once again.

A better alternative for removing a porous and whitened plaster surface would be to sand/polish the plaster. That process removes the porous material and restores a hard, dense, and smooth surface. Unfortunately, when dealing with discolored exposed aggregate, such as pebble finishes, sanding and polishing is virtually impossible.

(Reprinted with permission from onBalance August 2020)