Since 1992, I have built solid trusting relationships with pool owners providing pool maintenance and pool repair throughout the Sacramento region. My principles and actions continue as the foundation of my reputation.

I am grateful for a long list of satisfied customers. Customers are the best judges of a company’s integrity. 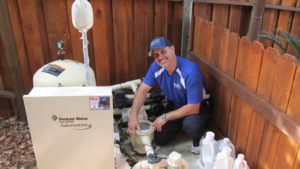 My journey in the swimming pool business began in 1992. I was broke and needed to pay rent. I found a part-time job cleaning pools for a local pool builder and (we) quickly discovered that I was a natural understanding each customers unique needs and effectively providing solutions.

One thing led to another and I started Mike the Poolman in 1995.
23 years later my simple philosophy remains the same: DO WHAT’S BEST FOR THE CUSTOMER AND BUSINESS WILL THRIVE.

We invite you to CONTACT US and find out for yourself.

And, why is it that ABOUT pages rarely tell the consumer DETAILS about the owner of a company?
It will usually say how dedicated they are to customer service and how their goal is to make you happy, and so on and so on but how is that ABOUT the company or ABOUT the owner?
I have NOTHING to hide so I offer to you info about myself and our company!
Read on for more details about Mike the Poolman.

Our mission is to provide unparalleled Weekly Pool Service and Repair to Swimming Pool Owner’s in Folsom and its surrounding areas.

Our core principals are:
We provide solution based options to allow customers to make educated decisions.
We make honest, truthful recommendations based on customer needs.
We will try to refer you to another professional if we cannot help.

Our approach builds trusting and committed customers that produce repeat business and an ever increasing source of referrals. Our practices lead to long lasting relationships and a sustainable business for the future of our customers and our business.

As mentioned above, I entered the pool industry in 1992. I needed to pay rent and found a part-time job cleaning pools for a wonderful couple managing Premier Pools Service Department out of their home. We quickly discovered that I was mechanically instinctive amongst the inter-workings of swimming pools and within six months I was invited by the owners at Premier to become a salesman in the expanding pool construction department. That didn’t work out too well and I was transferred to the remodel department. That didn’t work out either and all the while I was kicking and screaming and soon found myself back in the (now in-house) service department. I didn’t realize it for years to come but thanks to the owner’s insistence that I attend new construction and remodel sites, I had gained invaluable knowledge as to how pools are built, remodeled, the sales process, customer relations, and, my own maturity. Before long I was asked to manage the service department and in 1995 Premier Pools and Spas generously sold part of their service route to me.
On October 1, 1995 my business launched and with my need to constantly learn I devoured every swimming pool educational course I could find near and far. Within a few years I unexpectedly found other pool techs calling me for advice and demand for my services has consistently grown.
And, the second most asked question: How did I come up with the name Mike the Poolman ? Quite innocently- when I worked for Premier a few of our customers' children (now grown!) used to refer to me as "Mike the Pool man". It was fun and I went with it never realizing it would become as marketable or successful as it has.

Years later my simple philosophy remains the same: DO WHAT'S BEST FOR THE CUSTOMER AND BUSINESS WILL THRIVE.