Want to lower swimming pool chlorine demand AND evaporation? Expose less water to the sun by valving off those water features !

Swimming pool water features are attractive and appealing but when run during the day they increase chlorine demand and evaporation. Consequentially, running the water feature all day costs the pool owner more money to replace the additional chlorine required to sanitize the pool and water to refill it.

I love my 5 foot waterfall. It’s beautiful and emanates such a soothing sound, but, it’s a chlorine pig. 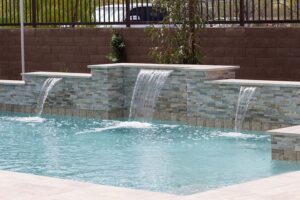 It’s a juice hog.
It’s a bleach guzzler.
Running a water feature exposes more water (surface area) to the sun allowing it’s UV rays to break down greater amounts of chlorine. The more chlorine is “eaten” away by the sun, the more I have to add each week to keep a residual and proper sanitation.

Let’s do a little math: the average pool is 400 square feet so the average pools is exposing 400SF of water surface area to the sun. The UV rays of the sun in turn are affecting 400SF of water and the chlorine in it. If you have a 2 foot wide x 3 foot high spillway you have 6 extra square feet of exposed water, and that’s just standing still. Of course water doesn’t stand still when it falls so really you are exposing 6SF of water about every 2 seconds. So… if we do the math per minute… 6SF of water x 30 = 180SF of exposed water per minute. One hour… 180 x 60 min= 10,800 SF !!!
If you run your pump an average of six hours a day that’s 10,800 x 6 = 64,800SF. If you leave the spillway off its 400SF (and for the most part, the water on the surface stays very still. The sun is reaching more than just a flat 400SF but not much more). Now you know why I encourage my pool service customers to leave the water feature off if its not important to them!!!!!

The question is, is it worth it to you?
Many of my weekly pool service customers could care less if the spillway is on every day during normal filtering hours. Others love it and can’t live without their sheer descent and the sound it emits.

For those who don’t care if it’s on everyday I suggest running it only when entertaining and they want to show off their stylish waterfall. This in turn decreases chlorine demand and cost$ less money in chemicals and fill water. For those who don’t mind spending a little extra for the pleasure, so be it. They pay a little more but it’s worth it to them.

I hope I have been of help.