In balanced swimming pool water, why does the pH eventually rise after acid lowers it? 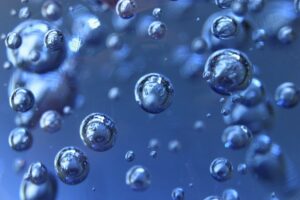 One answer lies in the fact that whenever the pH is below 8.2, there is generally more CO2 in water than its natural equilibrium level with the atmosphere.  Because of this, the extra CO2 will off-gas into the atmosphere over time, and the pH rises.

Unless checked, the pH will continue to rise until the CO2 reaches its equilibrium of about 8.2 to 8.6 depending on the amount of carbonate alkalinity.  The lower the starting pH, the faster it rises at first.  The more alkalinity (80 ppm and higher), the stronger pull to a pH of 8.2 and higher.  This is one of the difficulties that pool service techs have to deal with.

But there are exceptions to the above rule. For instance, a common but occasionally unrecognized factor which interferes with CO2 off-gassing or absorption is a pool cover.  When pools are covered with non-gas permeable covers, such as the common blue bubble solar blankets or solid vinyl automatic safety covers, the exchange of gas from water to air and air to water is blocked.  The pH can remain unchanged for many days, even weeks, when pool covers remain on the pool.

So how long does it take for CO2 to off-gas after adding acid for typical pool water? Or, why does the pH “rebound” happen faster and higher in some pools than others, or faster one time than another in the same pool?

CO2 off gassing, and its relative speed, are dependent on several factors, which includes alkalinity, the starting pH, water temperature, circulation, ratio of water volume to air-exposed surface, and atmospheric pressure.

Next: The Role of CO2 in Swimming Pool Water, part 3