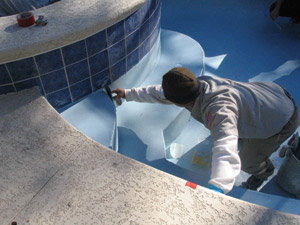 It is confusing and alarming that the NPC’s (new plaster pool) start-up program promotes a negative Saturation Index, as low as -0.7.   Three years ago, the NPC declared that any negative SI causes plaster problems and is not to be allowed, and they know that new plaster is weak and more vulnerable to aggressive water than 30-day cured plaster.  So what is going on?

The NPC says that the NPIRC assisted in developing their startup program.  Where is the study that documents their start-up program (similar to the “traditional”) as best for plaster pools?  According to NPIRC’s Phase 2 (2004-2005) study, the “acid” startup was deemed superior to the “traditional” start-up. (Obviously the study was flawed).  Phase 3 (2005-2006) resulted in conflicting and inconclusive data.

The NPC has been campaigning on the importance of preserving and protecting their product, so will they teach their members that aggressive fill (tap) water is more detrimental to plaster during the time the water is actually filling up the pool than during the 30 days that follow?

Will the NPC teach that plaster needs to harden for 6 to 8 hours before being filled with water, and that the pool should be tented in hot and dry conditions?

Will the NPC teach that “plaster dust” in new pools is likely a sign of improper plastering practices or aggressive fill water?  Will the NPC establish the policy that plasterers are responsible to test the tap water, and if found to be aggressive, compound it before using it to fill the pool?  Quality and properly cured plaster together with appropriate fill water does not create plaster dust.

Will the NPC stop teaching that gray mottling discoloration, white spotting, flaking, delamination, and craze cracking are related to low-calcium and/or low-alkalinity fill water, and that they actually have nothing to do with startup chemistry or subsequent chemistry?

The NPC should promote best practices, and be upfront with the pool industry by answering these questions.