Reprinted with permission from Kim Skinner of OnBalance 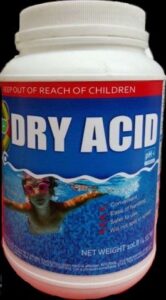 There are some differences between muriatic acid (HCl), dry acid (sodium bisulfate, NaHSO4), and sulfuric acid (H2SO4) in the treatment of swimming pool water.  We will attempt to review and clarify these three types of acids.

When added to water, all three of these acids increase the amount of hydrogen ions (also known as hydronium ions) present in water.  These hydrogen ions immediately react with alkaline components in pool water such as bicarbonate (alkalinity) ions and convert them into carbonic acid, thus reducing the alkalinity in the water and lowering the pH.  Also, when added, these three acids add a byproduct to the water.  With muriatic, it is the chloride ions (Cl), with dry acid and sulfuric acid, the bi-product is sulfate (SO4) ions.

Muriatic acid (also known as hydrochloric acid) is probably the most common and most used type of acid for lower pH and alkalinity in pool water, and performing acid washes.  The strength that is purchased for pool water use is normally 31.45%, but sometimes is marketed at 20% and even 10% in supermarkets and hardware stores.

There is the possibility of purchasing a higher strength sulfuric acid in bulk containers which has the strength of 93% or higher.  This high strength acid is about 3.5 times stronger than muriatic acid.  However, we advise to NOT use 93% sulfuric acid due to it being very hazardous to use.  It is extremely corrosive, more so than muriatic acid and sodium bisulfate.

Also, other potential problems to consider when using sulfuric acid (including sodium bisulfate) is that they add sulfates to the water.  In time, the content of sulfate increases in the water, which then can combine with calcium ions and form a precipitate crystal.  Calcium sulfate deposits can be particularly difficult to remove from pools.  Regular acid washes do not have much of an effect on removing this deposit.

High sulfate contents in pool water can also be more corrosive to cement finishes as it builds up in high concentrations over time.

The following are formulas on how much of the three acids to add for lowering alkalinity:

For muriatic acid, it is Volume (of the water) divided by 125,000 then multiplied by the ppm desired reduction in alkalinity which then gives the amount of QUARTS to add.

For sodium bisulfate (dry acid), it is Volume divided by 47,000 then multiplied by the ppm desired reduction in alkalinity which then gives the POUNDS to add.

For 38.5% sulfuric acid, it is Volume divided by 128,000 then multiplied by the ppm desired reduction in alkalinity which then gives the QUARTS to add.